RETURN
Pons de Balazuc
He is the most celebrated personage of Balazuc. He took part in the First Crusade, and with a provenal chaplain, wrote its history (Historia Francorum qui ceperunt Jerusalem) which is one of the best eye-witness accounts of the expedition.
But he did not finish it as he was killed in 1099, a few days before the fall of Jerusalem.
Some buildings on the headland with the Chastel-Vielh and a primitive church.
The lords of Balazuc controled an important and permanent ford set on the rocky layer bed of the river.

This nave was built in the 11th century.

The Romanesque Church
in the 11th and 13th centuries
The second nave was built the first, in the 13th century and vaulted in the 17th century
RETURN
Madona in painted limestone carved in the 15th century
THE LORDS OF BALAZUC 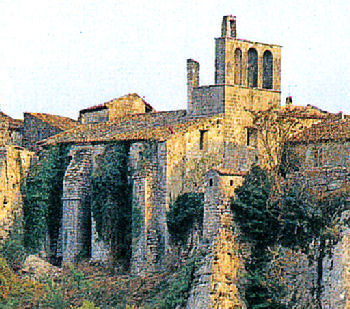 The Church has some magnifiscent Stained glass from Jacques Yankel

Balazuc before the 10th century

The Altar Stone discovered beneath the abside of the old church is a witness of an early christian church, built before the 11th century.

An Old Chapel
This very old building has been turned into a garage. It has remnant of vault and window, high and narrow. It is a pre-romanesque chapel.

Starting from the 11th century texts allow us to follow the history and events in the lives of this great family. Their influence was widespread and they were "Suzerains" of numerous lords in the Vivarais, which shows their importance.

Guillaume de Balazuc
He was a well-known troubadour at the end of the 12th century and shone at the court of the Count de Toulouse. He was perhaps a great-grand-son of Pons.
Seal marked : WI DE BALADUNO, the name of the lord Wilhelm de Balazuc, in the 13th century 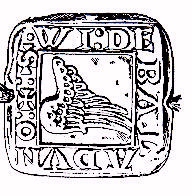 Before the year 1000, there therefore existed a village around the headland called "La Roquette" which dominates the river Ardèche. Le Chastel-Vieilh or Castel-Vieilh

The romanesque church, with a single semicircular vaulted nave with an original bell-tower of provençal type, was built during the 11th century and was known as Sainte Marie-Madeleine's. In the 13th century a second nave was added, built on to the north side and vaulted in the 17th century.