The Square Tower
This tower was built between 1200 and 1230. The only entrance was by a ladder placed at an opening 5m above ground level, which made it easy to defend. The actual entrance was pierced during the last century, through walls 1m20 thick.
The Square Tower in back of the rampart
Two main lanes went across the village in the 13th century. - in the lower part the lane leading from the Summer Gate to the Sand Quarry Gate ; this lane called "Public Street" in 1464. - in the upper part the lane leading from the Duke's Court to the "Pousterle". 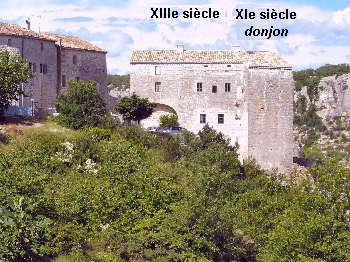 The Summer Gate
In the lower part of the village, this is overlooked by the Summer Tower built after rampart.
The Gate of the Sand Quarry
Going towards the ford, this is the best preserved gate.
The Postern
On the north side, near Château, a wide gate has been closed up : there is a postern for the northern gateway. To-day, this area is still called "La Pousterle".
The Knight's Houses
There remain three knight's houses dating from 13th century. Two are in the lower part of the village, near the Old Church, and one on the rampart near the New Gate. They are the finest houses in the village and they were modified. These noble dwellings, like the towers, had to be higher than their neighbour's houses.

The Old Square
Up to the end of the 11th century, this was the heart of the village, near the Old Church and on the lane leading from the Summer Gate to the Sand Quarry called "Public Street" in 1464. Notice and admire the mullioned windows, medevial booths, and the old municipal notice board, carved out of the rock.

This large building without particular character surmounts the rocks. A first construction, a donjon, was built in the same time than the first rampart in the 11th century. It was changed in the 13th centuries with new constructions. This was the residence of the lords of Balazuc after they abandoned the old chateau known as Chastel-Vieilh.

THE RAMPARTS
The gates
Outside the ramparts, this funeral chapel, dating from the 13th century, was under the direct authority of the Bishop of Viviers. At Balazuc, a joint lordship exercised power, both laic and religious. Above the entrance to the chapel a much damaged carved shield represents a sparrow-hawk. In 1300 the lord of Balazuc was called Guillaume des Eperviers (sparrow-hawk). The chapel was a ruin in 1762.
RETURN
Saint-John the Baptist's Chapel
A Knight's House built over the rampart
In the 13th century the village spread out and it is surrounded with the rampart. The Square Tower stands on the greatest hill. A fortified gate guards the road to the river.

Balazuc conserves many vestiges of its powerfull medieval walls. Larges portions of these still existe, intact or pierced with windows, this makes much of its charm. The 12th and 13th centuries were troubled times of between the Cathares (or Albigeois) and the kings of France. Many towns and villages became fortified.

The first rampart
Two of the oldest gates remain, one below the Old Church, on the path leading down to the river, the other near the centre ; it is protected by a lateral loophole. A portion of the wall is still visible, incorporated in the wall of a house.
This wall was probably built in the 11th century with the first keep, a part of the actual castle.
Few vestiges of it remain as many of its stones were reem-ployed in later buildings. The area fortified was small and limited to the lower part of the village around the romanesque Old Church.

The second rampart
This wall enclosed an area three or four times larger than the first. It was built during the 13th century with a new keep (the Square tower), a fortress near the Old Church, the houses known as the "knights' houses" and the enlargement of the castle , to receive the court of the lords of Balazuc. The fortified part called "Castrum" in a document of 1464, gave security to the rich families of the village and its sur-roundings, including artisans and local peasants.
During the Hundred Years War, this wall was a protection from the bands of "Routiers", brigands who devasted the countryside. 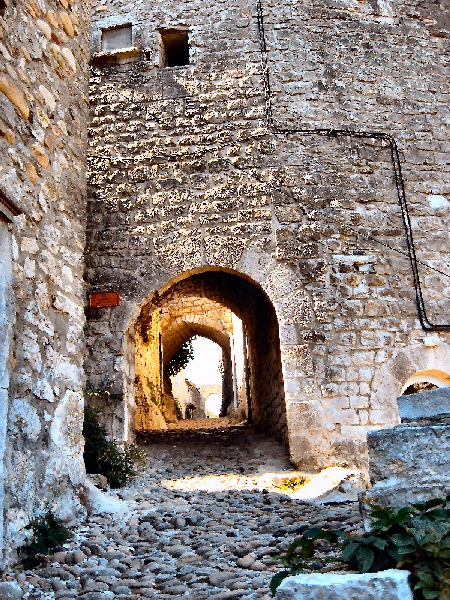 RETURN
Oldest gate and rampart : 12th century
The youngest rampart : 13th century
Other buildings
BALAZUC IN THE 13th CENTURY
The chateau was restored recently to offer some "chambres d'hôtes" or French-style Bed and Breakfast.
The two stages to build the chateau. 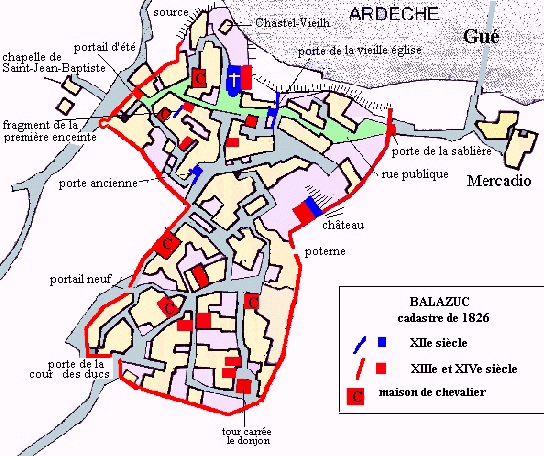 The house the Bailif, main officer
of the lord.