These came from the south. Around the village can be found vestiges of their homes , amonst rocks and caves containing potteries, stone and metal objects .They kept large troups of sheep and goats, buried their dead in collective tombs, chambered tombs and dolmens. Research in the last 50 years has shown that large numbers of them dwelt on the " Gras " of Balazuc.
Around 2,500 B.C. they knew copper, brought in the form of beads and tools for piercing leather (bradalw). From 2,000 B.C. bronze objects, axes and beads, were imported via the Rhône Valley and from the Languedoc.
Important changes at the end of the Bronze Age. From the 11th B.C. onwards, tribes from eastern France, excellent farmers made the first terraces on the hillside slopes so as to plant crops of them. Advanced metallurgy provided them with bronze for tools and jewelry. Their dead were buried in individual tombs, or incinerated, the asches being placed in urns then put in the earth.
In Balazuc itself, there existed a ford for crossing the river, a little downstream from the actual bridge ; it is used in the 8th century because a votive axe set down in the river in this period.

Migrants in the Iron Age

From the 6th century B.C. in the beginning of the Iron Age, there were the first great invasion with horsemen that used breeding. These nomads, cohabiting with peasants, are mainly known by their tombs beneath tumuli of stones.
The Gauls followed in 3rd century B.C. settling down to cultivate the land. Their presence still lives in local place-names.

Flint arrowheads and pendants found in neolithic collective stone graves.
5000 years ago, the first farmers
The name Les Salles means "noble house". Perhaps during the Middle Ages there was building of this type over the ruins of the gallo-roman villa. Nothing remains to show that the site of the village was lived in during the gallo-roman period. But in the plain, upstream in the hamlet of les Salles there had been a roman villa, or large farm, if we can judge by discoveries of tiles, columns and ceramics. In the 6th century this was the property of a certain Marius, who built the neighbouring first church at Saint-Maurice-d'Ardèche where there was already a cult to Mercury.

A Paleo-Christian Sarcophage (about 380-420 AD)
In the 16th century was found at Les Salles, a exceptional sarcophage of white marble. It had been made in a workshop in Arles and is decorated with sculptures of christian inspiration, and dates from the end of 4th or the beginning of 5th centuries.

The two large cities of Uzès (Department of the Gard) and Alba (Alba Helviorum in Vivarais) were connected by a road during the reign of Antonin the Pious in the second century, during the period of the Pax Romana (Roman Peace). This road can be followed by the milestones placed along it on the roadside at Pradons, at Saint-Germain; near Sauveplantade, where Jupiter was worshipped, by vestiges of a bridge over the river Auzon and part of the road at Saint-Germain.

Paleo-Christian Sarcophage from les Salles
RETURN
Hameau des SALLES
The Barasses cave, situated on the right bank of the Ardèche, opposite the village, contains silex tools and bones of wild animals.
These were left by men who had sheltered there at different times in the beginning of the last ice age, over a period of thousands of years of cold. They hunted mainly the ibex and also the reindeer, the great stag, the chamois, the horse, the "woolly rhinoceros".
There are seven scenes, from left to right: Christ brings back to life the son of the widow of Naim. Daniel poisoned the dragon. Christ cures the paralysed man. Christ is announcing to Saint Peter that he will deny him three times. Christ cures a man blind from birth. The arrest of Saint Peter. Saint Peter is preaching, from rock and holding a scroll of the Holy Word.
In Gallic times, they are no dwellings but a sacred place on the headland of "Roquette" overhanging the river Ardèche. The road from the ford, used since the Bronze Age, go across the small pass.
This bronze axe was found in the bottom of the river, at the location of a ford.
RETURN
Balazuc is a old Gallic citadel to control a ford.
BALAZUC PREHISTORY
GALLIC
AND GALLO-ROMAN PERIODE 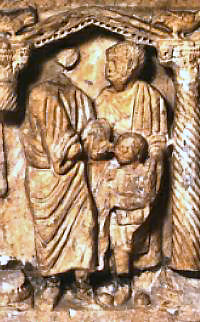 The cure of a children blind from birth.